Can You Follow the Current in a Conversation? 8 Tips for Staying in the Flow 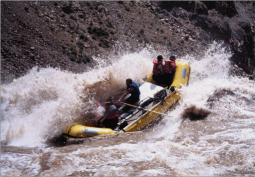 While I was in college, I worked during the summers as a whitewater guide running the rapids in Grand Canyon, Arizona. One of the first things that you learn as a guide is to follow the current of the river downstream. Staying in the current saves your arm if you are driving a motorized boat, or it saves your arms and back if you are rowing. The current or flow of the river is seen on the surface of the water, and after a while, you can even feel the current through the movement of the boat. To navigate the river successfully, you have to give your attention to the direction of the current reflected on the surface of the water and make whatever corrections are necessary to stay in the flow.

One time I became too preoccupied with the passengers who were sitting at the back of the boat who kept talking to me. All of a sudden, the current grabbed the front of the boat and pulled it directly into the cliff on the side of the river which caused the boat to do a complete 180 degree turn. We were stuck. The right side of the boat was held against a sheer rock cliff with the nose of the boat pointing back up stream. To make matters worse, the current of the entire river was holding the boat against the rock wall. As hard as I tried, I could not escape. Fortunately, we had a second boat with us on our trip. I tied a line on the front of the boat and threw it to the other boat. They used the line to pull us off of the wall and back into the downstream current so we could continue our trip.

Similarly, there is a current or flow in conversation. If you can’t recognize the current in the conversation, it is difficult to follow its flow. Because not every conversation is planned or prepared, sometimes the current of the conversation will take you places that you never thought you would go. For example, a while back I was working with a number of executives and I noticed one of them kept giving me odd stares. Finally, I asked him if there was something wrong. He said, “It’s your hair!”

“What about my hair?” I asked.

He responded with, “It’s too perfect! I bet it is fake.”

A bit surprised I assured him that it was real by my messing it up. Then I walked over to where he sat and even allowed him to pull on it a bit so he could test out its authenticity. Then I continued, “So what about my hair bugs you so?” Given that we were in a casual setting, he was wearing a faded ball cap. He promptly removed his cap and said, “I guess I am jealous because I don’t have any to speak off.” He was totally bald except for a bit of hair on the sides of his head. I continued, “So the fact that I have hair and you don’t distracts you and makes you feel less valuable as a person?”

“I guess so.” He responded.

So I then asked him, “What could I do to make you feel like I value you and your ideas in this this class?”

He thought for a minute and then said, “Well, I guess if you brought me a donut to eat before class that would make me feel like you cared about me.”

“Are you sure that is all that it would take?” I queried.

“Ok. How about I do better than that? How about I treat the class to lunch and buy barbecue for everyone. Would that work?” Obviously the class urged him to take me up on my offer. From then on, the strange looks disappeared, and he was much more engaged than he had previously been.

This was not a conversation of cataclysmic proportions. This was something that occurred on the spur of the moment, but I was able to recognize that something was amiss and just jump in and go with it to try to understand what was going on.  Ultimately, my ability to be flexible and go with the natural flow of the conversation allowed that to happen.

Here are a number of suggestions that will help you recognize and manage the flow or the current in any conversation:

Be an observer. In each interaction with others there are messages that are being sent all the time. Usually we don’t recognize them, so they pass us by even though they are occurring right in front of us. Pay attention to individuals’ nonverbal behavior, their word choice, the tone of their voice, and any emotional reactions. Being able to recognize nonverbal signals allows you the luxury of managing the conversation more effectively.

Notice your projection. When people begin to act in ways that don’t seem to be congruent with the flow or content of the conversation, try to be more aware of what you are projecting to them. Sometimes another’s behavior is more a reflection or reaction to what we are projecting to them. So if you notice what you are doing, it allows you to assess whether their behavior is a function of your delivery or something that is coming from them. If your behavior is respectful towards them, then you know that their behavior stems from something that they are thinking and feeling.

Seek meaning. When others act in ways that you don’t understand, you want to search for the meaning behind their behavior. For example, you might say something like, “I can see that you are upset about something. What’s going on?” By stating your perception and then asking for clarification, they will help you understand their behavior and avoid any inaccurate assumptions.

Create safety. What was unusual about the conversation I shared above was the fact that the man felt safe enough to answer my questions in front of a larger group of people. If he wouldn’t have responded, then I would have known that it was not the time and place to hold that conversation with him. If the person you are talking to seems reluctant to speak, try asking a few more questions. Asking clarifying questions indicates to the person that you care enough to really understand their position. This can help them feel that there is a safe environment for continuing the conversation.

Follow the answer. If the person you are talking to will answer your questions, listen carefully to what they say and then decide where you want to go with the conversation. For example, when I asked, “What’s up?” My listener said, “It’s your hair.” I responded with, “What about my hair?” Notice that I took his answer to one question and used it to create another question. By doing this you can clarify what you think you understand, and you can explore a deeper meaning as you continue to pursue the conversation.

Control the direction. You can control the direction of a conversation by the questions you ask and the answers you give. Before I offer ideas that may run counter to what a person is saying, I would ask enough questions to insure that I have understood.  I am a big believer in the motto: “Seek first to understand, and then to be understood.” Asking questions and then giving your full attention to the answers creates respect and fosters understanding. Once you feel like you have fully understood, it is easy to say, “I have a different viewpoint, would you listen to me and then tell me what you think?” I have never had anyone tell me that they were unwilling to listen to me if I first listened to them.

Keep your composure. Sometimes our conversations become heated. When this happens don’t take a person’s emotional reaction personally. Continue asking clarifying questions and try to understand them. Seeking to understand the other person and listening to their answers to your questions will reduce the emotional intensity in the conversation and will restore any rationality that may have departed.

Be sincere. Insincerity in trying to understand the other person will disrupt the flow in the interaction. If you cannot give your full attention to them, you would be better to set a time when you can be fully present in the conversation. I have found that underlying sincerity is an honest desire to understand and learn. When sincerity is absent, your actions can easily be misinterpreted as manipulation rather than contribution and collaboration.

Recognizing the flow or current in a conversation is the first step to creating an interaction that will be mutually beneficial. Initially, you have to be aware of the flow and then be courageous enough to jump in and discover where the current will take you. Once you find yourself in the current, you can do a number of things that will not only keep you in the flow, but will also help you to arrive at your destination. It takes practice, but your involvement and flexibility will be well worth the effort.