Do You Follow the Facts? Three Tips for Strengthening Your Conversations 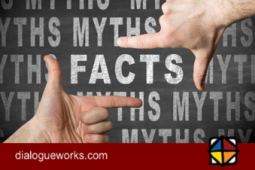 Recently I was discussing with a friend the importance of facts or evidence in conversation. My friend told me the following story about a wayward son. It seems that his son was staying out all hours of the night and coming in early in the morning. The situation was creating some conflict with my friend’s other teenage children. Finally my friend confronted his son and told him that if he wanted to continue to live in the home that he needed to come in by 12:30 am on the weekends and by 11pm on the weekdays. His son agreed to these parameters.

That very night, my friend’s son did not come in at the appointed time, so the father waited for the son to return home. When the son came through the front door, his father greeted him by pointing at the face of his watch. The son returned his father’s gesture by holding both of his hands out, with his palms up. On his hands were what appeared to be oil, dirt, and some kind of black powder. Neither of them said a thing. My friend told me that he was so upset at his son’s failure to keep his commitment that he had decided not to say anything until the next morning.

At breakfast my friend asked, “Son, what happened last night to our commitment?” The son replied, “Dad, I am sorry about that. I was on my way home, and I came across an elderly couple whose car had slid off of the road in the snow. When I pulled over to see if they were alright, I noticed that they had a flat tire. It took me quite a while to change the tire and get them out of the snow.”

My friend told me how glad he was that he had kept his mouth shut and not accused the son of poor judgment. He also shared how surprised he was that our thinking just seems to come out of nowhere and always assumes the worst in many situations.

Using data or facts in conversation is essential to helping your listener understand the logic of your thinking and in the creation of solutions to our problems. The facts determine the choices we make. However, there are a couple of things that you need to remember about sharing the facts.

First, the facts are verifiable information that is readily available to your scrutiny. That means that your thinking or the interpretations you make are not facts simply because you thought them. Your thinking is derived from your observation of the facts to which you assign some meaning. It was very easy for my friend to observe that his son didn’t come in at the agreed upon time. From that evidence, it was easy to create the interpretation that his son didn’t care about keeping his commitment. However, my friend’s interpretation was inaccurate.

Second, we must remember that sometimes we just don’t have all the facts; consequently, our assumptions or interpretations may be incomplete or inaccurate. Nevertheless we often see our interpretations as the facts when there is really no supporting evidence other than we thought what we did.

Given that distinguishing between facts and interpretation is not always easy, here are three suggestions for using facts or data in conversation.

1. Discover the facts.  We need to be better at listening and identifying the facts. The facts may include the facts of a situation, for example, you can verify that you are reading in the seventh paragraph of this article.

Facts may also include the data and the consequences of the situation. Such a statement might sound like, “The report was three hours later than when we told the client they would have it.” The client’s response was, ”We wonder if we can trust you going forward.” It is factual that the report was late, and the tardiness was negatively mentioned by the client which was the consequence of being late.

Additionally, there are the facts of expectation versus actual occurrence. For example, the following statement demonstrates facts of what was agreed upon versus what actually happened: “The report was due by 3:00 pm, but it was not delivered to the client until 9:00 am the next morning.” This is how we use the facts in conversation most frequently.

2. Decipher the facts. Sometimes people will offer their opinion as if it were a fact. You need to be more discriminating about what fact is and what is opinion or interpretation. This is not easy if you are not used to making the distinction.

Often the news in the media we hear or read is not really supported by any substantial evidence other than it may be the opinion of persons of reputation who are offering their opinion as a fact. That still does not make the opinion a fact.

Likewise sometimes people will offer a partial fact, a fact accompanied with a falsehood, or a fabrication that is represented as a fact. Making the distinction between what is fact and what is not, may require some additional research or scrutiny on your part. Because we don’t often have the time or make the time, the quest to identify the facts may not occur. So we either end up accepting judgment or opinion of others as fact simply because we don’t have the time to do the research, or it may just be easier to accept something that coincides with your own view. Taking the time to more carefully examine what is purportedly the facts will help you to become a more careful thinker and will allow you to scrutinize the thinking of others as well as prepare to hold a difficult conversation.

3. Defend the facts. If you are looking for the facts you want to search for all of the data. To this point, you ought to gather and marshal all of the details that support the other person’s point of view. This results in an increased objectivity on your part because it forces you to think from another’s perspective. As painful as this might be, it will greatly increase your perspective.

Additionally, you may find it helpful to engage in an in-depth, fact-finding process before exploring a pressing problem for which you are trying to create a solution. People may have a collection of differing or incomplete data which leads them to different conclusions.  Discovering what each person believes to be the facts may be helpful in understanding their interpretation of a particular challenge. The more you attempt to understand everyone’s perspective, the easier a solution may be created. Once the facts can be agreed upon, the challenge begins when people make different interpretations from the same set of facts. Being willing to defend a comprehensive view of the facts is a great start for understanding any situation.

Taking the time to discover all the facts and decipher what is really fact and what is interpretation will help to establish a foundation for holding any difficult conversation. Also looking for all of the facts, even those that don’t support your view or opinion will help you to understand the perspective of others. Creating shared meaning about data and interpretation and your different views is the first step for talking about difficult issues and for creating solutions that are mutually agreeable.