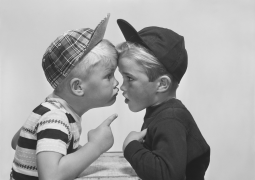 After running the river for a number of years, my curiosity finally got the best of me. I wondered what it would be like to swim one of the major rapids. With some hesitation, I put on an extra life jacket for extra buoyancy and jumped into Hermit Creek Rapid.

What I soon discovered was quite amazing. As I was swimming up the face of the first wave, I literally passed through the wave and found myself sliding down the backside of the wave into the trough below. Then as I proceeded to swim up the face of the second wave, the same thing happened. This happened four more times until the rapid dissolved into the flow of the river. It had never dawned on me that the foam and spray of the exploding wave could not support me, so I was pulled through the middle of the wave.

As the foam and spray of the waves could not support my weight, heated or high emotions will not support the rationality and logic needed to successfully navigate a difficult conversation.

Recently, an individual wrote me about being invited to a meeting where the sole purpose was to belittle and berate him for a decision that he had made. The person in charge even brought a crony to support him in the tirade that he unleashed on this individual. Being derailed by the assault in the meeting, my reader reached out in an attempt to try to understand how he might have managed this situation more effectively. Here are a few tips for managing a highly charged or emotional interaction more effectively.

Acknowledge their feelings. Acknowledging the emotion that a person is displaying has the effect of allowing them to see themselves and how they are perceived by others. Additionally, validating their feelings can help defuse the situation. Hopefully this increased self-awareness will help lessen their emotional reaction. If their emotion intensifies rather than subsiding, you must decide if you can stay in their presence knowing that their irrationality will not help them engage you in holding the conversation. An acknowledging statement would be, “I can see you’re upset.”

Seek the meaning behind the emotion. When someone becomes emotional, we know that they are interpreting something that you said or did in a negative way. All we experience in the moment is their emotional reaction. The challenge is to get to the meaning behind the reaction. After acknowledging their feelings, ask them a question. You might say, “I can see you’re upset. What is causing you to feel this way?”  The purpose of the question is to identify the thinking behind the emotion. Until the meaning is uncovered, you may become caught up in the emotion of the conversation which will not support the rationality necessary to resolve the issue. In other words, where high emotion is present, the conversation will go nowhere.

Remain calm. Whatever the other person does or says, you must not take what they say personally, nor must you meet their emotion with the same degree of intensity. If you do, the conversation will escalate until one of you or both of you loses control in some fashion that you may both regret. If you believe that calm needs to be restored to the situation, excuse yourself and set a time to talk later. However, do not blame them if they are the one who is highly emotional.

Attempt to restore rationality. I have found that making an attempt to openly state what is obvious is a great way to recognize some different choices in behavior. For example, I would say, “We obviously don’t agree with each other, or I can see that you are not happy with something that is going on. Before we go too far down this road, I wonder if you would be willing to share the data or evidence you have and how that has led you to think or believe what you do. Then I will do the same. Can we do that?”

Often when people become angry at one another, they have drawn or made huge assumptions about the other person or their actions. Slowing the conversation down in this way is effective because it forces both of you to draw upon the logical data that was the basis for your actions and thinking.

Ask for the data. If the person continues their tirade and cannot identify or offer any concrete data to support their thinking, then you can probably assume that they have no logical explanation for their assumptions other than what they thought. If they can’t offer a reasonable explanation for their assumptions, then you want to offer the data or evidence that led to what you said or did, and then ask them to comment or address what you have offered. Doing this may restore some degree of rationality because they have to think, analyze, and comment on what you have said.

Listen for the facts. If you listen carefully while identifying the facts, no amount of blame, accusation, or criticism will derail you. You are trying to understand the basis for what the other person is thinking. Continuing to focus on this aspect of the conversation will allow you to avoid getting emotionally engaged. And if you aren’t hearing any facts, you obviously want to ask for them as we specified previously.

Identify common ground. As you listen to the other person, try to identify what is most important to them. If you can do so, see if you can marry what they want with what you want. In every argument there are often common values, but the emotional reaction in the moment obscures our ability to identify what matters most to others and to ourselves. Identifying common ground lifts the conversation out of the emotion and puts the focus on creating a solution.

Create a solution. If you can identify what is important to them and to yourself, then you can work together to come up with a solution that will meet both your needs and theirs. However, this can only be accomplished if rationality is restored and each individual’s values are out in the open. Those values become the basis for the solution you will create.

In this discussion, I am assuming that the other person in the conversation has some degree of integrity, rationality, and interest in solving a problem rather than just addressing it emotionally. Unfortunately there are those individuals who do not possess those interests or have never learned to resolve conflict in any other way. They have learned that being highly emotional is a great way to control any conversation because most people will back down when confronted with highly intense feelings. If you find yourself in this situation, you may need to decide if you want to continue to work and play with this type of individual. Such a decision would depend on the frequency of this type of behavior and your comfort level in dealing with this kind of behavior.  Being deliberate in resolving this kind of a situation can go a long way to improving your relationship and the results that you create together.