Does Your Nonverbal Behavior Box You In? 12 Tips for Improving Your Body Language 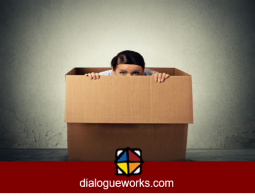 I had just finished speaking at an event and a number of people came up to the stage to talk and to ask questions that they didn’t want to ask in front of the entire group. After a few moments I was approached by a woman who began rapidly asking me a number of questions. Before I could finish answering one question, she would hit me with another question.

This behavior aside, what was more bothersome was a number of her nonverbal behaviors that became increasingly annoying. The whole time we were talking, she wouldn’t look at me in the eye. In fact, she kept looking at my ear. I found myself wondering if there was something crawling out of my ear or something else that seemed to hold her attention that I had missed when I had dressed myself earlier in the day. Then I observed that she kept turning her body toward the door and then looking away like she was getting ready to leave. While I was answering some of her questions, she frequently looked down at her watch. Finally, she moved uncomfortably close to me and that’s what did me in. I thanked her for her questions and moved to speak with the person who had been standing behind her.

While she may have had some logical reasons for her behavior, it was disconcerting enough that it negatively affected my interaction with her. If you want to communicate more effectively, avoid misunderstandings, establish rapport, and build trust in both your personal and professional relationships, it’s important to understand the nonverbal messages that you and others are sending. When we are unaware of the messages we may be inadvertently sending in the way we speak and act, we may sabotage the effectiveness of our conversation.

In order to help you become more aware of your behavior and what you might do to improve your nonverbal communication, I would offer the following tips to improve the unspoken messages that you send to others.

1. Manage your facial expressions. Your face is often reflective of what is going on in your head. If your facial expression is unexpressive or emotionless, the other person in the conversation may interpret your expression as a sign of disinterest even if you have what we call a “thinking face” or a “resting face.” Try smiling as you look at the other person and portray an interested and positive demeanor. Smiling projects goodwill and warmth. It is not uncommon for your smile to be reflected back to you by the person who is on the receiving end. We know that the way we feel is often projected onto and felt by others. Offering a positive expression will be felt by your listener.

2. Maintain eye contact. A good rule of thumb is for you to give or reflect the frequency of eye contact that a person gives you. Poor eye contact can communicate a lack of interest. On the other hand, if you give too much eye contact, the other person may become uncomfortable with your constant stare. Keep your eye contact relaxed, not over the top, or extreme. You want to put people at ease, rather than creating uneasiness by the way you look at them.

3. Listen to your tone of voice. I like to say that tone is the music of the mind. In other words, a person’s emotion is often projected in the tone of their voice. In this way you can discern the tenor of what a person is feeling and thinking. This is often where disconnects will occur. People will convey one thing with the words they select, but the tone of their voice will communicate an entirely different message. It’s important to remember that the tone of the message is stronger than the words used. Monitor your tone carefully to make sure you are delivering the message you intend to send.

4. Maintain good posture. Whether you are sitting slumped or sitting straight, if your arms are open or crossed, you are transmitting a message. People who lean back in a chair or away from the person speaking can be interpreted as disinterested or as being arrogant or overly confident. Sit up and lean slightly forward to demonstrate your interest in the other person and what they are saying.

5. Use verbal reinforcement. Without interrupting, you can demonstrate your interest in what people have to say by vocalizing agreement and support by making statements such as, “hmmm,” “yes”, “interesting,” “really,” or “nice,” as a way of communicating your attentiveness in what they have to say or share.

6. Watch how you breathe. When we become anxious, angry, or frustrated, we tend to breathe more quickly and shallowly. When we are tired, we are more likely to sigh. Sighing is often taken as a sign of annoyance or disinterest. Try breathing more deeply while concentrating on being relaxed. Doing so will calm and relax your demeanor as you are speaking with others.

7. Manage your gestures. Those who are more assertive often gesture when speaking. They may point, chop, accentuate a point, invite, or even draw pictures in the air front of themselves when they speak. Notice the intensity of your gestures when speaking. You want to make sure that your gestures are not so emphatic or distracting as to take away from your spoken message.  If you don’t monitor your gestures, then it is not uncommon for the words in a message to communicate one thing, but the gestures to communicate something else. Your gestures should emphasize or reinforce your message rather than detract from it. I remember one time when someone came into my office and in the excitement of sharing her message she began gesturing so wildly that she knocked a vase of flowers over on my desk. My attention was diverted to saving the papers and notes that were on my desk and the meaning of her message was lost in my irritation at the situation.

8. Provide ample space. When standing with people, be aware of your proximity to them. Some people have no space limitation, while other people require much more personal space to feel comfortable. If you take a step toward someone and you notice them start to lean, turn, shift, or step away from you, recognize that you are probably too close to them and take a step back. You will probably notice them relax. When this happens, you will know that you have managed the physical proximity effectively.

9. Watch how you shake hands. If you are in a formal setting where you are meeting people that you don’t know, avoid the “dead fish” or “fingertip” handshake which can signal insecurity. Likewise, avoid the “vise-grip” squeeze that usually projects arrogance. Finally, avoid shaking people’s hands in a way that feels like you are pumping for oil. This type of handshake is often interpreted as an overreach or over-exaggeration of how you portray yourself. Take the person’s hand firmly but don’t squeeze, and move your hand up and down two or three times. If you need to practice shaking hands to feel more comfortable, then do so.

11. Give your full attention. This is easier said than done. Most of the time we only hear about 50% of what people say because we are too busy thinking about what we are going to say next, how much we really disagree, or we end up thinking about something that is entirely unrelated to the topic at hand. When we are not fully present, people can tell and will feel the lack of connection and they will usually disengage or will not give you their attention when it is your talking turn. Either way, neither party will fully understand the other.

12. Manage your energy. We all exude energy. Notice if people seem to project coolness, disinterest, enthusiasm, excitement, negativity, or some other feeling. You can manage your own energy by identifying an emotion that you want to portray and then holding that emotional word in mind as you communicate. If you observe others for their emotional energy, you will begin to notice their demeanor and how it impacts how their message is delivered and received.

Your nonverbal behavior, the way you speak, act, and express emotion, helps you establish rapport and personal connection with others. Likewise your unspoken messaging can establish trust and acceptance with other people. Your pervasiveness and credibility is also improved as you use your verbal and nonverbal skills to increase the power of your message.

Share with me below your experience with strange or unusual body language.