Leaders, How Do You Begin Your Conversations? Nine Phrases NOT to Use 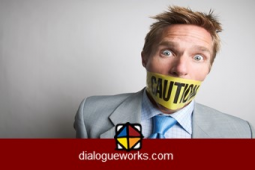 I really believe that what begins well ends well. It is important to begin a conversation in such a way that allows the other person to hear and think about your message. Recently, I sat and observed a senior leader begin his conversation with two directors by stating, “As you are probably already thinking….” One director looked at the other and then at their leader and said courageously, “You know when you say that it scares me to death?” The other director chimed in by saying, “Yes, it just makes me hope that I am thinking the same as you, and if I’m not, I really wouldn’t be inclined to tell you.” Their candid feedback really helped this leader recognize how important it is to begin a conversation in a way that doesn’t make it difficult for the person to respond, disagree, or add their perspective

As a leader, it is important to think about what kind of information you want to give or receive from your listener. The way you begin a conversation, particularly a potentially difficult conversation, will have everything to do with how the other person responds. In an attempt to be a more collaborative leader, some will employ what they think is a softer approach which can end up feeling somewhat manipulative.

Here are a number of phrases or words that any leader would do best not to employ in beginning a conversation.

“I’m sure you’re already thinking about this.”

If someone hasn’t thought about this, do you really think they would candidly say, “Well actually, I haven’t thought about this?” If they did admit they haven’t thought about the topic, they might violate the expectations of the leader and make him or her question the intellectual capacity of their listener. No one will run that risk. They would probably choose to say nothing or just go along. Instead, if you really want to know what someone is thinking, all you need to do is ask them. If they feel safe, then they will give a candid response, allowing you to gain their perspective without tainting their response.

This statement creates the presumption that the leader is right and creates a difficult hurdle for the other person to overcome. Not many would dare to say, “Yes, I have to tell you that you are wrong.” That is not going to happen. When a leader begins this way, it is like saying, “I just want you to do this.” If you want to know what the other person thinks, make a statement of what you think and then ask them what they think. For example: “I think we need to spend more time addressing our clients’ needs. What do you think?” You could then follow up with the question, “How do you think we might best do that?”  Asking such questions allows the person to think and respond and provides you with insight into how they are thinking.

This is what people usually say before they offend someone. So this phrase is really a setup to offend the person. It is like you are giving yourself permission to be disrespectful. If you think that a person might be offended by something that you have to tell them, then you should really think about how you might deliver your message in a way that is respectful. If you are giving feedback, it is important that the person understands the information in order to make the appropriate changes in their behavior. Beginning a conversation in this manner offends them before you have even delivered the message.

This statement has the effect of saying, “Whatever your understanding is, you’re not understanding or I wouldn’t have to tell you what you should understand.” Ask the person what their understanding is first. Once you know what they understand and what they don’t, then you can offer them some additional data that you would like them to know and apply. You could use this statement once you have asked them questions and you want to clarify. However, I wouldn’t begin the conversation this way. Ask before tell.

“That is a creative idea, but…”

Anytime you use the word “but” in a sentence, it negates everything that went before it. If you heard the above statement, you would almost expect to hear something like, “That was a creative idea, but it’s the stupidest thing I have ever heard.” When people hear “but” they know that everything that follows is going to be a negative response. Rather than use “but”, you would be better off to use “and”, “and yet”, or “to build on that.” These phrases allow a person’s idea to stand and allows you to add another bit of data that needs to be considered.

This comes across as a command or a demand which can be very demeaning. We don’t command people; we work with them. Rather than make such a statement, you would be better off to ask for their assistance, such as, “Would you have some time to help me right now?”  or “Could you help me with…?” Asking questions as a means of making a request is much more respectful to a person and communicates value for their contribution. Also, don’t be afraid to use the words “please” and “thank you.”

“I’m not the one that thinks this, but…”

If you are not the one that thinks something, then is it really your place to say it? This statement almost feels like the introduction of some sort of gossip or hearsay that could be questionable. Or it could be interpreted as coming from someone else that may be questionable. If you take such a tack, you really open the door for the person to discount what you have to say. If you have feedback to give, provide it and hold the conversation about what needs to change, don’t attempt you soften a message that you need to deliver in this way.

“Are you open to some feedback?”

I remember when one of my first managers would say this. In my mind, I would say to myself, “No I am not open to your feedback!” When you begin with this question, the person hearing it would naturally assume the worst and then resist the message that you would like to give.

By avoiding the phrases discussed above, you can hold more effective conversations and ensure that your listener will be more engaged and open about the information that you seek.

Do you need help learning how to have difficult conversations? I would love to help you. Click here to book a free consult with me.